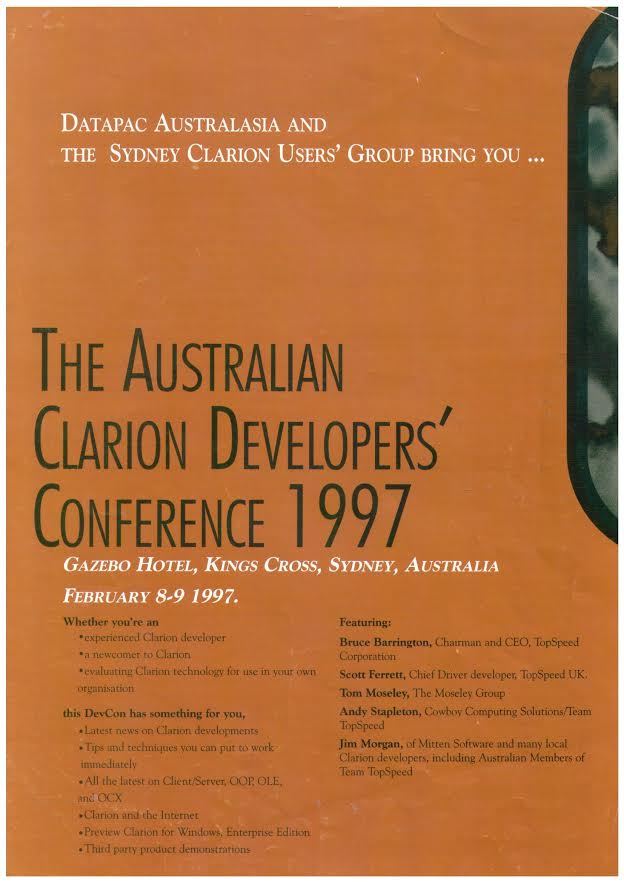 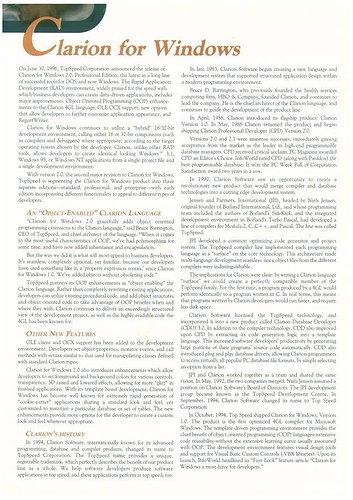 See below for an OCR extraction of the text!

Clarion for Windows continues to utilize a “hybrid” 16/32-bit development environment, calling either 16 or 32-bit components (such as compilers and debuggers) where appropriate, according to the target operating system chosen by the developer. Clarion, unlike other RAD tools, allows developers to create identical looking Windows TM 3.1, Windows 95, or Windows NT applications from a single project file and a single development environment.

With version 2.0, the second major revision to Clarion for Windows, TopSpeed is segmenting the Clarion for Windows product into three separate editions—standard, professional, and enterprise—with each edition incorporating different functionality to appeal to different types of developers.

“Clarion for Windows 2.0 gracefully adds object oriented programming extensions to the Clarion language,” said Bruce Barrington, CEO of TopSpeed, and chief architect of the language. "When it comes to the most useful characteristics of OOP, we’ve had polymorphism for some time, and have now added inheritance and encapsulation.

But the way we did it is what will most appeal to business developers. It’s seamless, completely optional, yet familiar, because our developers have used something like it, a ‘property expression syntax,’ since Clarion for Windows 1.0. We’ve added objects without obsoleting code." TopSpeed portrays its OOP enhancements as “object enabling” the Clarion language. Rather than completely rewriting existing applications, developers can utilize existing procedural code, and add object structures and object oriented code to take advantage of OOP benefits when and where they wish. Clarion continues to deliver an exceedingly structured view of the development project, as well as the highly readable code the 4GL has been known for.

OLE client and OCX support has been added to the development environment. Developers set object properties, monitor events, and call methods with syntax similar to that used for manipulating classes defined with standard Clarion types.

Clarion for Windows 2.0 also introduces enhancements which allow developers to set foreground and background colors for various controls, transparency, 3D raised and lowered effects, allowing for more “glitz” in finished applications. With its template based development, Clarion for Windows has become well known for extremely rapid generation of “cookie-cutter” applications sharing a standard look and feel, yet customized to maintain a particular database or set of tables. The new enhancements provide more options for the developer to create a custom look and feel wherever appropriate.

In 1994, Clarion Software, internationally known for its advanced programming, database and compiler products, changed its name to TopSpeed Corporation. The TopSpeed name provides a unique, registrable trademark, which perfectly describes the benefit of our product line as a whole. We help software developers produce software applications at top speed; and these applications perform at top speed, too.

Bruce D. Barrington, who previously founded the health service computing firm, HBO & Company, founded Clarion, and continues to lead the company. He is the chief architect of the Clarion language, and continues to guide the development of the product line.

In 1990, Clarion Software saw an opportunity to create a revolutionary new product that would merge compiler and database technologies into a cutting edge development system.

Jensen and Partners, International (JPI), headed by Niels Jensen original founder of Borland International, Ltd., and whose programming team included the authors of Borland’s Sidekick, and the integrated development environment in Borland’s Turbo Pascal, had developed line of compilers for Modula-2, C, C+ + , and Pascal. The line was called TopSpeed.

JPI developed a common optimizing code generator and project system. The TopSpeed compiler line implemented each programming language as a “surface” on the core technology. This architecture made multi-language development seamless, since object files from the different compilers were indistinguishable.

The implications for Clarion were clear: by writing a Clarion language “surface” we could create a perfectly compatible member of the TopSpeed family. For the first time, a program produced by a 4GL would perform identically to a program written in C. In real terms, this mear that programs written by Clarion developers would run faster, and require less disk space.

JPI and Clarion worked together as a team and shared the same vision. In May, 1992, the two companies merged. Niels Jensen assumed a position on Clarion Software’s Board of Directors. The JPI development group became known as the TopSpeed Development Centre. In September, 1994,’ Clarion Software changed its name to Top Speed Corporation.

Hi,
I went to this event.
Met Bruce Barrington and my company took him out to a seafood restaurant for dinner one night.
If I remember correctly, it was the first full licence I purchased for CW.
Was working in C3 at that time, and still do on the odd occasion.
Fond memories.

A printed one! Wow

Thanks @Richard for the high res version. I ran it through OneNote OCR and added the result to your original topic. If there are any typos let me know but I think I got them all.

Thanks for that - I attended that Devcon. It was the only time I met BB. I purchased the DET templates from Tom Moseley which got around various limitations with large dictionaries… money well spent and still in use today in some of our older systems.