Learning Clarion on a budget

I’ve recently started a non-dev role at a company who use Clarion, however I have been interested in getting a dev job for a very long time and would like to learn Clarion to try and move to a dev role in a couple years

I only heard about Clarion after coming to the new role and I have a very slim understanding of it. I do have a small degree of skill with SQL, but just hobby stuff to teach myself. The Clarion licence is far and away unaffordable for me right now, which I understand is a bit of a roadblock. Are there any other ways of learning Clarion without shelling out big bucks on a licence? Are there trial/community/education licences available? I am a current university student so I think I would qualify for an education licence if there was one

Not really much available now for budget Clarion learning. I wouldn’t put any faith in Community Edition rumours either. However, given your interests and work situation, I would get in touch with the developers at the company and let them know exactly what you have posted here. The Clarion community has not been getting any younger, and many likely will be considering how existing code/projects can best be passed along as retirement comes forth.

As a developer at a research university in the US, I’d happily have you start working with me in a nanosecond. After completing your studies and if all goes mutually well, you’d be looking at a nice, permanent position.

I think you are in a good spot with your small degree of skill with SQL. Do you have experience playing/working with Microsoft SQL Server?

I would leverage your skill with that. There are a ton of YouTube videos and books on learning and using SQL Server. And you can download the free version of SQL Server Express Edition and SQL Server Management Studio.

Clarion has its own file driver, called TopSpeed, which probably most Clarion developers use. It’s a good database driver although it has some drawbacks and minor issues with speed and reliability, in particular with large databases (say, over 100,000 records) or when dozens of concurrent users are accessing it.

Clarion works very well with SQL and can be a better application when using SQL instead of using TopSpeed files. Many developers start out with TopSpeed and eventually go to SQL. If you start out with SQL, you are already a step ahead.

Does your company use TopSpeed files or SQL with Clarion?
If they use SQL, that’s a good thing. You will need your SQL skills if you want to someday work with your developers.
If they use TopSpeed files, that’s also a good thing. You can offer helping them switch to SQL. They are probably thinking of doing that someday. Maybe their excuse is they don’t know SQL well enough to do that, and have been just putting it off.

How many licenses of Clarion does your company have? The licenses are for a developer, that is, if a developer uses 2 computers, e.g. a desktop computer for his main work and a laptop as a backup (a wise thing to do), the developer only needs 1 license.

How many developers does your company have? They should have a license for each developer.

Besides being a good fit for Clarion, knowing SQL makes it easy to get up to speed learning and developing Clarion applications. Because a fair amount of work developing an application is setting up the database. Of course you need to know how to do that, using good third-normal form rules for the design.

You should also know how to import SQL tables into Excel. (It’s so easy). And know how to use Excel pivot tables. You can show off your developer skills if you can do that. End users (e.g. sales managers) like to see their data in pivot tables. This can be a good foot into the developer world.

You should also know how to create reports for SQL using the SQL Server Reporting Services. This is a highly valuable skill to master.

If you had a SQL Server database setup already, you can easily import the tables structure into a Clarion dictionary. Then you can simply generate a working (compiled) application with browse procedures, forms and even reports.

Anyway, I think you should approach the SoftVelocity sales department and tell them you are a university student and would like to have a trial license. It can’t hurt to ask.

It might be better in the long run to learn another language such as javascript, C#, or Python, since there are a lot of resources out there that won’t cost you money. Once you learn one language, then it’s not as difficult to learn the next when the time comes.

I wonder if SV would allow me to transfer a license to an older version of Clarion that I’m not using to helper5740? I have C8,C9, and C10. Maybe give him my C8 license. Don’t know. Just brainstorming. I don’t like the thought of money stopping someone from getting their foot in the door and potentially improving the community as a whole.

Having said that, getting Clarion is a small first step. The 3rd party stuff is where the real money come in to play.

Hi Bob, thanks for the great reply.

Our current flagship product is Clarion with SQL, however it works in conjunction with a seperate product that uses a combination of TopSpeed and SQL, which is currently in the process of being rewritten to only use SQL

The legacy version of the flagship product which is no longer in development but still in long term support uses strictly TopSpeed.

I haven’t used SQL Server specifically, but I have worked with MySQL, PostgreSQL and SQLite. I’ll ask the question about whether we have multiple licenses available.

That would be very much appreciated!

I don’t know about now. But SV definitely did this in the past. My original license was one I bought/transferred from another developer who didn’t need it. Once transferred I could upgrade to the latest version. This was many years ago, so might not still be the case.

Transferring a license that you don’t need because you had more than one seat is different than upgrading from x1 to x2, then transferring x1.

If that were the case, then nobody would ever have to buy a new license, because someone else could be upgrading somewhere and you could get their hand-me-downs.

You’re right. I misunderstood what Don was saying.

I have a database of FAQ’s for earlier versions of Clarion. It is hosted at https://www.litreum.com. Select the ClarionFoundry node on the tree on the left.
Note that the search function has an annoying bug in that if you type something in and press Enter, the site refreshes. So don’t do that, rather click the search button. So for example, if you want to seach for how to filter a browse using Clarion, the search entry would be clarion filter browse and you will be presented with a list of search results. Good luck, and welcome!

Totally agreed. Clarion is a waste of time to learn as your first language.

Pick up C# first as it instils proper object-orientated thinking and methods, then you can learn the old languages if you need to.

Clarion sits in the pile with rubbish like Delphi for me - no one with any sense would start a new production code base with it.

I like the times when someone says “totally agreed”, then adds on stuff that I don’t quite agree with.

Sorry, I don’t mean to imply that’s your thoughts, just mine really

However, Clarion does have a steep learning curve

I agree with this. The actual language code is straight-forward, and in most cases easy to read and write. The generated code is at least “consistent” and so reading that also becomes easy. If you’re smart, you try and write “similar” to the generated code, so even a lot of embed code tends to be easy to read.

This also has he advantage that taking over an existing project is easier, because usually most of the app is generated, so if you’ve seen one app you’ve “seen them all”. Thus most of the effort in taking over a new app goes to domain knowledge - ie what is the app trying to do, and how do the users of it use it.

But of course we are 27 years into Clarion for Windows, so many, if not most active commercial programs are pretty large, and mature. They typically span multiple app files - in most cases tens of apps, in some cases hundreds of apps, and just getting to grips with the organization of the code can be some real effort.

That all said, there are ways to learn Clarion (for free) and acquire some of the experience that Jon is referring to. These all assume access to Clarion itself. there are no free versions of this I am aware of, but I would recommend talking to your company. For them the cost of supplying you with a clarion copy is low (maybe only $400) and certainly if a non-programming person in our company wanted a copy of Clarion to learn I’d supply it in a heart-beat. It’s certainly worth asking - and if that fails save up the $400.

The first obvious resource is ClarionLive (disclosure: I’m a host and occasional presenter there). There is a formal webinar every Friday, and a more informal one each Wednesday (for ad-hoc questions and answers.) Episodes are recorded and available at www.clarionlive.com.

Alas this has been going on for more than a decade, so there’s a lot of material covered. Not all of it is relevant, but there are certainly plenty of webinars about everything. As a starting point I’d recommend a couple of sets;

a) Configuring the IDE - most recently done with Clarion 11, but we’ve done it with each build back to Clarion 7. These webinars cover all the IDE settings, in some depth and are done in the form of a panel (who often disagree with each other on what a setting should be.) These are important because you should firstly understand the tool you are using, and secondly because your preferences will differ from say mine, and so knowing what you can set, and experimenting with it can be useful.

b) for the next step I’d start at the beginning - the Dictionary. We haven’t done a lot of webinars about this, but I did do one series on formal database design, and that covers both the dictionary itself and also how to design databases in the dictionary. We are all (myself included) working with “imperfect” dictionaries, so we have to work with those, but it’s a good idea to understand the fundamentals as well for when you need to make improvements. You likely know some of this from your SQL courses, but seeing it applied in clarion provides a nice base. 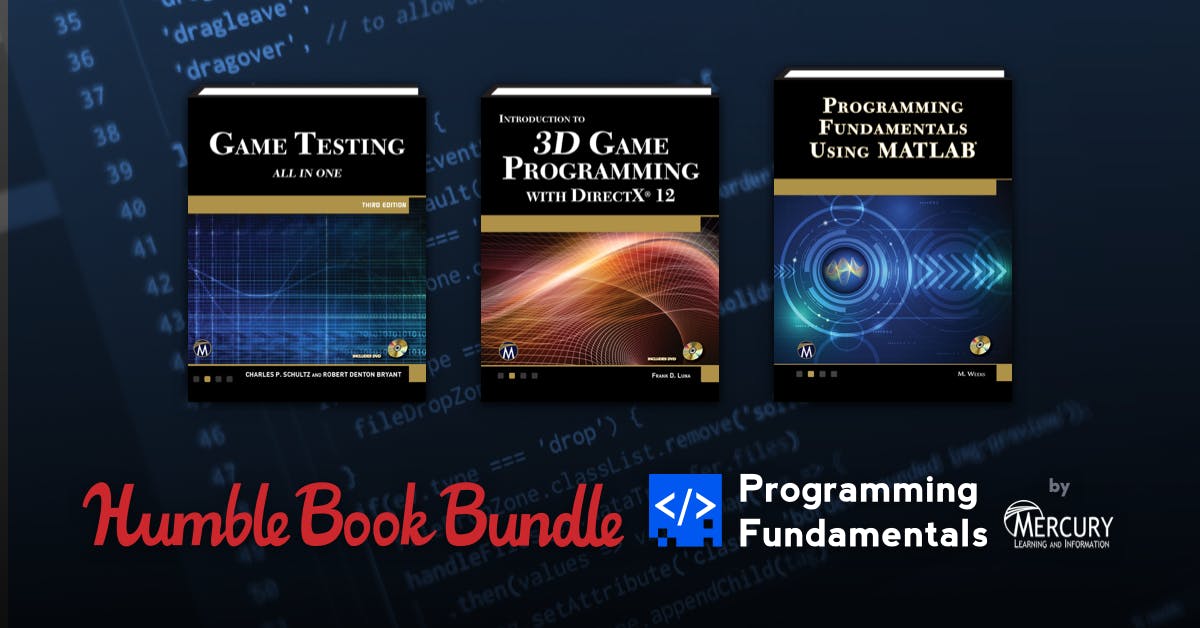 We’ve teamed up with Mercury Learning to deliver programming fundamental ebooks like Game Testing, Third Edition! Plus, pay what you want & support charity!